In English class, we had to read a book and choose our own artifact that we can make relating to the book. I chose to make a board game. There were many other options like a mock youtube channel mock podcast and children’s book.

My book was I Wish You All The Best by Mason Deaver. It is about a kid named Ben who comes out to their parents as LGBTQ2+. At first, their parents don’t accept them. At first, their parents kick them out and they are forced to go live with their sister who they have not seen in 10 years, and her husband. At first, he doesn’t like living with them and it is a little bit awkward at first but then he starts to get used to them. Their sister’s husband Thomas is a teacher who got them enrolled in his school and he meets some friends. In the book Ben has a hard time coming out to his parents and everyone around him when they finally do know one judges them and instead embraces them for who they are.

Why I chose this artifact

I chose this artifact because I thought I can connect most with the book on this artifact. Through the game, I will have punishment and chance sort of like Monopoly. On those chance and punishment cards, there will be sayings like you take a chance coming out to your parents, it doesn’t work out, move 3 steps back or your crush on this guy influences your grade, move back to the start to relearn everything. I also put pictures resembling the book’s theme. The book’s theme is that you should always respect people for who they are even if they’re different. For example in the book, Ben doesn’t want to come out to anybody because he is scared and doesn’t want anything to change.

The elements of my book that I added to the game

You start at the beginning of the game. During the game each player will spin the wheel to determine how many spots you go up, like what Ben is going through. As I said before there will be chance and punishment cards resembling the challenges that Ben had to go through being queer. As you move up the board the board will tell you what challenges you overcame.

This game is fairly easy to set up. You take out the board and add the pieces. There are two places to put your chance and punishment cards, sort of like Monopoly. Then you take out the four-player pieces and put them at the start. You put in the wheel and then you’re ready to play!!!!

Each player spins the wheel to determine how many spaces they advance. There are two types of cards: chance and punishment cards. Punishment cards mean that something bad is going to happen to you and chance cards mean that you have a fifty-fifty chance of getting something good. If you spin a 10,8 or 5 you have to move down 6 spots. The first person to get to the finish line wins.

I think I can do better next time by getting better time management. Instead of finishing my book on the last day, I will read 5 more pages each day. Also, I should’ve remembered to put in all my sticky notes and stuff to remember the characteristics and the traits of the characters. For my game, I should’ve sketched out by the board, done my cards then my blogpost, and then finished up my board game. Next time I will definitely remember to do all this stuff to make my game better.

Like I said before my game is sort of like Candyland so how you win is pretty similar. In my game, you have to overcome challenges to get to the end. Those challenges may set you back and make it longer so you can’t win so fast. My chance and punishment cards can set you back or move you forward Depending on which one you pick.

Here are some pictures from my game! 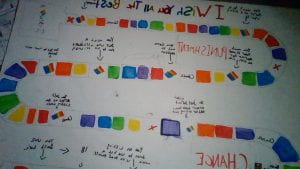 By zoebk February 22, 2022.  No Comments on I Wish You All The Best  Uncategorised